What is Virtual Box Android?

What is Virtual Box Android?

Android is a quintessential operating system with an adaptable, quick interface and a host of great features. Furthermore, the open-source operating system allows you to explore creativity and develop user-friendly apps for your business.

Upon building a great android app, you need a platform to test it because you cannot deploy it without ensuring that the app is aligned with your business objectives. This is where the significance of Virtual Box comes into the picture.

In this article, we’ll walk you through the complete details of the Virtual Box and why it is highly recommended by developers. We’ll also teach you how to install Android ISO on VM using the Virtual Box.

Virtual Box was primarily created by Innotek Gmbh, which was then acquired by Sun Microsystems in 2008. In 2010, Oracle Corporation took over the control of Virtual Box and converted it into proprietary software rather than open-source.

Additionally, it enables the creation and management of guest virtual machines that run on Windows, Linux, BSD, OS/2, Solaris, Haiku, and Android x86 and, above all, the limited virtualization of macOS guests on Apple hardware.

For a vast majority of Operating systems, “Guest Applications” of the device driver and systems application are readily available, significantly improving the performance, specifically that of graphics. Moreover, it changes the resolution of the guest OS automatically without user intervention when the Window of a virtual machine on the host OS is resized.

When VMware was first released, it followed the terms of the GNU General Public License. For almost all the source distribution files, Virtual Box is free and open-source software, but its extension pack is distributed as proprietary software.

The licensing of Virtual Box was handed over to the GPLv3 with linking expectations to the CDDL and other GPL-incompatible licenses.

Virtual Box has extended support for Intel’s VT-X and AMD’s AMD-V hardware-aided virtualization. Harnessing these facilities, Virtual Box can allocate separate space for each guest VM and run that separately.

For instance, guest OS with ring 0 code runs on the host at ring 0 in VMX non-root mode instead of running in ring 1. Thus, Virtual Box can run each guest OS at a separate address space.

Starting with Version 6.1, Virtual Box only supports the above-mentioned method. Until then, Virtual Box supported only a few guests, mainly 64-bit guests, SMP guests, and certain proprietary Oss only on the host with hardware-aided virtualization.

It is how virtualization works in this mode:

In both of the above-mentioned cases, Virtual Box uses CSAM and PATM to identify and patch malicious instructions whenever a fault arises. On top of that, Virtual Box comprises a dynamic recompiler, based on QEMU, to compile any real mode or protected code in one go. For instance, a DOS guest, BIOS code, or any other operating system startup.

Using the above-mentioned techniques, Virtual Box can compete with Oracle VMWare up to some extent. The above feature was abandoned in Virtual Box 6.1.

Here are some of the compelling features of Virtual Box:

How to Install Virtual Box Android

Following the steps mentioned below, you’ll end up running Android x86 on your Virtual Machine.

Your first step will be installing the Virtual Box. You must download the software from its official website and follow the instructions mentioned there to complete the installation process.

You can start working on your main task after successfully installing the Virtual Box. Get an Android ISO-formatted disk image. The most prominent source of that is the Android-x86 project, a team of seasoned open-source developers who have spent considerable time compiling and running Android code on PC hardware.

Once you get the required ISO, you then have to open Virtual Box in your system and click the “New” button to create a new Virtual Box. You are prompted to configure a name and file location in the next step. Set the type to ‘Other’ and the version to “Other/Unknown (64-bit).” In case you are running a 32-bit Operating System, you must get 32-bit ISO. Adopting this technique, you can avoid compatibility issues down the line.

The next step will be configuring the amount of RAM you are going to allocate to the VM.  The maximum number will be decided based on the available resources of your system. Of course, you can’t allocate 16GB of RAM to your VM if you have only 32GB of RAM.

The absolute minimum RAM that VM needs is 2GB, but to run the VM seamlessly, you need to allocate it somewhere between 6GB and 8GB of RAM. It is worth mentioning here VM requires the same amount of resources that your physical mobile handset needs to run effectively. The more RAM you’ll allocate, the better will be the performance of the VM. 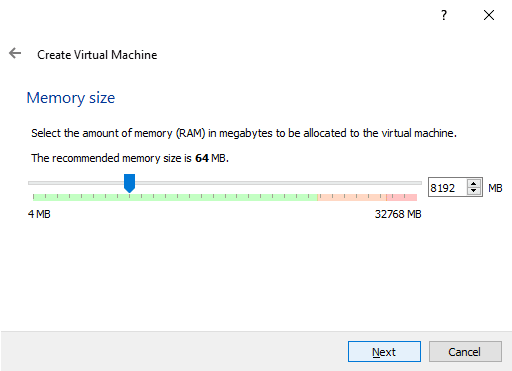 Any type of file will work here. Hit the ‘next’ button again and set the file size to “Fixed Size.” Finally, decide where on your hard drive you want to save your newly created virtual drive. Normally, Android x86 requires an 8GB hard drive.

Irrespective of the activities you want to perform on your virtual machine, a 16GB hard drive would be more than enough. Above all, it won’t hurt your computer’s performance. 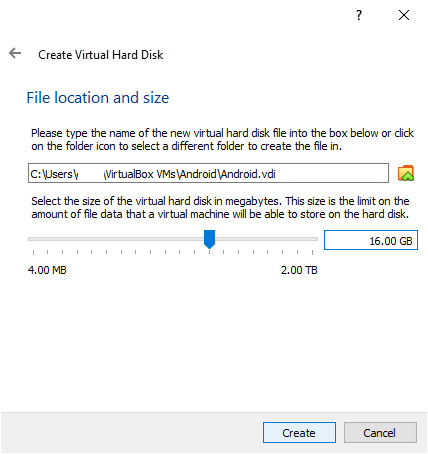 Allocate the hard drive for your virtual machine

The VM will be displayed in your list of machines, but you still need to configure a few more things before you launch it. Right-click on the Android device and click on the settings menu. 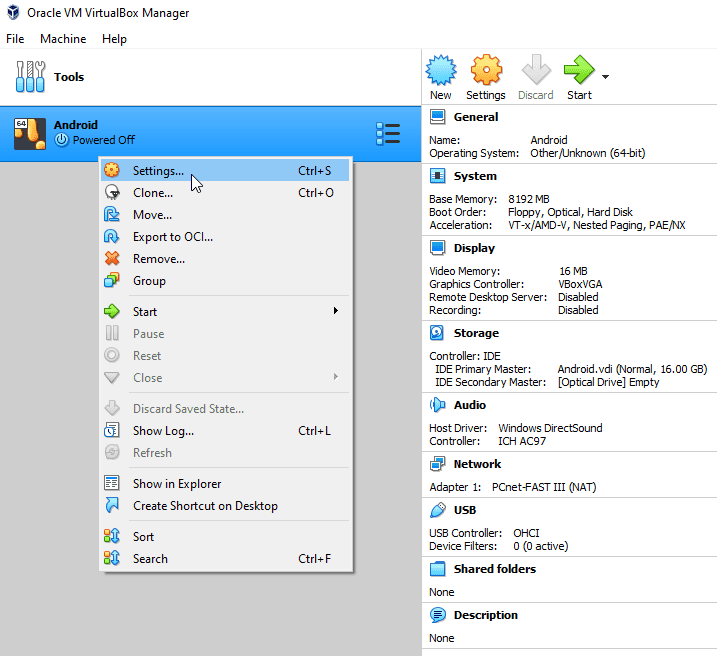 In the settings menu, you need to look at the ‘Processor’ tab under the “System.” Here you can decide how many CPU cores you allocate to the VM. You should allocate at least 2 CPU cores, but more is preferred. Like your mobile handset, the most CPU core translates into better performance.

The maximum number of CPU cores you can allocate to the VM solely depends on how many cores your computer’s CPU has. Although 2 CPU cores are enough for your guest operating system, more is preferred. 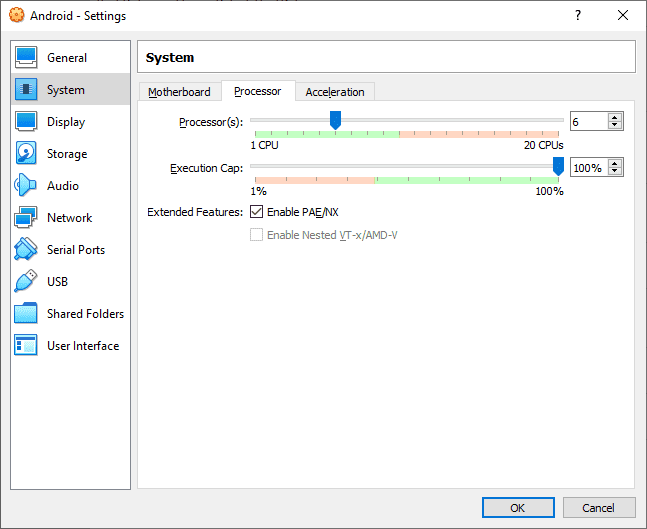 Allocate the number of CPU cores to your operating system

The next option in the settings is the “Screen” tab in the “Display.” Here you are allowed to increase or decrease the video memory available to the VM. You can keep it either 32 or 64 and make sure to assign “VBoxVGA” to the “Graphics Controller.” 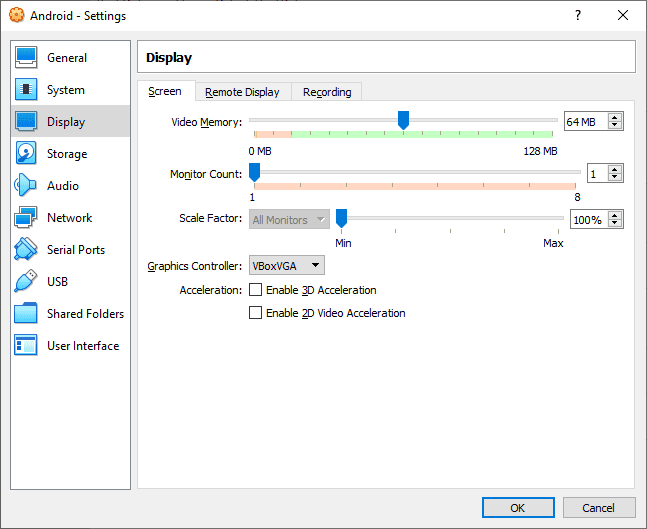 Allocate the space to the video memory of the guest OS

The next step in launching the VM is configuring the Android ISO disk image that is interpreted as an optical disk by the VM. To accomplish this task, click on “Storage,” click on an empty CD/DVD image, then again click on the CD/DVD icon on the right. Finally, select the option “Choose a disk file.”

In the next stage, you are promoted to select the ISO you prefer to use. This is where the significance of the Android ISO you downloaded earlier comes into the picture. Once the ISO is imported from the download folder, click on ‘OK’ to update the VM settings.

Upon successfully following the above-mentioned steps, you are ready to launch VM. To start the installation of Android, just select the VM and click on the ‘start’ button.

You might be required to “Select a startup disk,” in that case, select the Android ISO. The next screen will display boot options to install Android to the VM. Just scroll down the list and select the “Installation” option.

The next screen will be “Choose Partition.” Here you can instruct the VM on where to install the Android on your virtual hard drive. By default, you do not create any partitions, so click on the down arrow that will highlight “Create/Modify Partitions” and then press enter.

To create a new partition, highlight the “New” option then press enter. In the following step, you can configure the properties of the partition, but you don’t have to mess will all the remaining values.

Once the partition is created, you should write the change to the disk. To perform this task, move the cursor to the right and select “Write,” you are asked to verify whether you want to make this change. Hit “Yes,” and press enters to create a new partition in your host OS.

Once you’ve created the partition, select ‘Quit’ to return to the previous “Choose Partition” screen; here, you’ll experience that your new partition is readily available for use.

To install Android on your new partition, you first need to decide, what file system format you want to use, ext4 is the recommended option, but NFTS and FAT32 also work.

Android is in the installation phase in your virtual hard drive. Still, the process might take some time, depending on the resources you’ve allocated to your VM and your underlying operating system resources.

Once the installation is done, you’ll be asked whether you want to launch the Android or reboot the VM. Select “Launch Android,” so you’ll end up running Android x86 on your virtual machine.

At this stage, you have the freedom to configure your Android VM as you do with your normal Android device. The settings you pick depend on your preference.